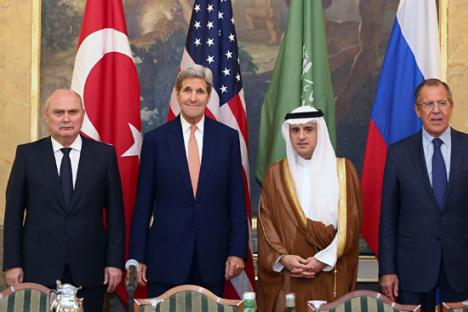 Lavrov-Kerry talks: No deal on resignation of Bashar al-Assad

YEKATERINA SINELSCHIKOVA
The foreign ministers of Russia and the U.S. met their counterparts from Saudi Arabia and Turkey in Vienna on October 23 for high-level discussions of ways to find a settlement to the Syrian crisis. Russian experts believe the talks mark the first step in the formation of a broad anti-ISIS coalition.

Extensive talks between Russian Foreign Minister Sergei Lavrov and U.S. Secretary of State John Kerry in Vienna on October 23 failed to yield a deal on the resignation of Syria President Bashar al-Assad.

Kerry and Lavrov, who met for the first time since Russian military operations began in Syria, were later joined by the foreign ministers of Saudi Arabia and Turkey.

The extended discussions centered around the settlement of the Syrian crisis and the creation of a broad anti-ISIS coalition.

Testing the ground for a big coalition

Lavrov’s statements indicated that the “quartet” is not Moscow’s preferred format for negotiations on Syria. Russia would like Iran, Egypt, Qatar, the United Arab Emirates, Jordan and other regional players to be involved in negotiations.

The Russian Foreign Minister called for full-scale negotiations between al-Assad and the “full spectrum” of the opposition, “both domestic and external, and with the active support of outside players.”

Russian analysts see the talks as a measure of progress towards finding a solution for the Syrian crisis.

“It was clear that solutions will not be found during one meeting, but the differences are so great that even the fact that a meeting was held is a step forward,” says Yelena Suponina, head of the Center for Asia and Middle East at the Russian Strategic Studies Institute. “International players are indeed testing the waters for a prototype of a possible international coalition.”

One of the main sticking points is still the political fate of the Syrian president.The most realistic option is to leave this topic out of the equation and focus on the fight against terrorism, Suponina says, adding that political will is required to solve “the problem of al-Asaad.”

Whether U.S. President Barack Obama has the political will or not, is a big question, especially since the United States has now entered the pre-election season, she added.

An active election campaign is also underway in Turkey, where parliamentary elections will be held next week. President TayyipErdogan’s party is looking to form a parliamentary majority.

Giving up his demand that “Assad must leave now,” would suggest that Erdogan suffers a foreign policy loss.

“I cannot imagine a situation in which Erdogan, with his authoritarian style of government, will appear as a weak politician before his own electorate,” says Leonid Isayev, an Arab scholar and senior lecturer at the Higher School of Economics.

Given the fact that this is a prestige issue for many negotiators, it is important to find a solution to the Syrian crisis, where no stakeholder loses face to a great degree.

2015-10-26
Editor
Share
Previous US Caught Faking It in Syria
Next Apple of Discord: Golan Heights Oil to Add Fuel to the Fire of Syrian War 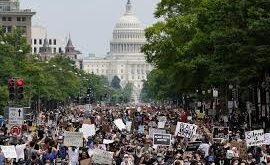 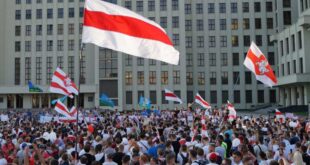