Iran has announced its readiness to cooperate with Russia, China and India on the issue of NATO’s missile shield and related threats from the military bloc, the head of its defense ministry said in Moscow.

“I’d like to support the idea of developing multifaceted defense cooperation between China, Iran, India and Russia to counter NATO eastwards expansion and installing a missile shield in Europe,” Hossein Dehghan said on Thursday, at an international security conference in Moscow.

Hours later Dehghan was cited by RIA Novosti as saying that Russia, China and Iran may hold tri-party defense talks.

“We discussed certain aspects of regional security. It was proposed to hold a trilateral meeting of Russia, Iran and China,” Dehghan said after meeting with Russian Defense Minister Sergey Shoigu. 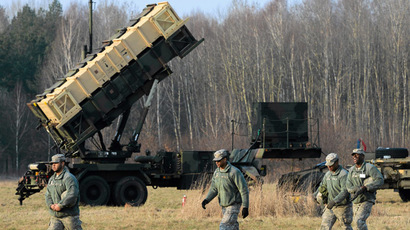 Despite a deal on Tehran’s nuclear program, the US is still going to site its missile defense installations in Europe. They are being deployed over a perceived threat from “nuclear Iran” – a pretext which Moscow called a “fairytale.”

“The threat to NATO countries posed by the proliferation of ballistic missiles continues to increase… the framework [of the Iran nuclear program] agreement does not change that fact,” NATO spokeswoman Oana Lungescu told Sputnik.

According to Russia, the controversial missile shield in Europe is staying because “the Missile Defense System was never about Iran.”

“This serves as yet more proof that references to the ‘Iranian [missile] threat’ served as a smokescreen, whereas the genuine objective is the creation of an anti-missile program with quite a different purpose,”the Russian Foreign Ministry wrote.

The US has for years insisted the missile defense system is needed for protection against potential missiles from rogue states, such as North Korea and Iran. Moscow strongly objected to new unilateral NATO military installations, citing national security threats. Russia proposed the creation of a joint system, but Washington rejected it.