Brussels to target strategic gas reserves, while forgetting the rest? 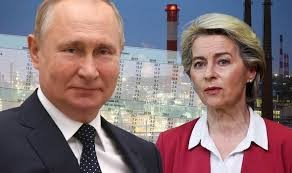 European Commission President Ursula von der Leyen has stated that later in October EU leaders will be discussing the set up of a strategic gas reserve. At the same time, the EU Commission seems to be looking at decoupling electricity and gas prices, in a move to quell the current steep price increases in the union. At a conference in Espoo, Finland, the EU president indicated that the current energy price hikes are mainly caused by much higher gas prices in general, and higher global demand for gas. She also indicated that Russia and other European gas suppliers have not been increasing supply yet. Von der Leyen admitted that the EU is for over 90% dependent on natural gas imports. She however also made a direct link to global energy price increases, due to economic growth and demand factors. In move to quell part of the current pressures in the EU, Norway has stepped up its overall gas production, but main supplier Russia is still not looking to increase overall volumes very soon. 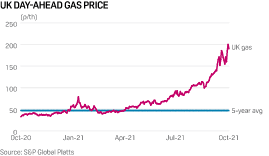 In an expected political move, Von der Leyen again made the link between Europe’s energy import dependency and the role of renewable sources of energy to counter the latter. She also made a direct link in stating that by introducing large scale renewable energy projects to the system, it should be stabilizing consumer price levels. It still seems to be clear that Brussels and most European leaders still are in a denial phase not to admit that part of the current problem is directly linked and caused by the intermittency issue of renewables. A decade of energy-transition, with main focus on wind and solar investments and pushing out hydrocarbon energy production, or even exploration (EU shale gas or Groningen gas field Netherlands), has resulted in a destabilized energy system in which not only immense pressure is being put on existing power grid capacity but at the same time available 24/7 energy providers have been phased out. To remove with a big bang German nuclear energy capacity, or coal fired power plants, leaves the total system in shambles. Not only is the energy, which in EU politics’ terms is electricity, system destabilized from within, but at the same time strategic planning has been thrown out of the window too. 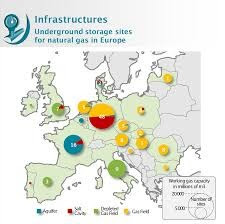 By pushing for green, without any doubt wanted by the overwhelming majority of consumers, but forgetting backup and geopolitical and geo-economic realism, has put the EU and others in a dire situation. Geopolitical conflicts with Russia and other oil and gas producers has led to a market shift that is currently being felt. The European gas market always was stable and fully supplied. At present, suppliers, such as Russia and even Norway, can choose from other clients, willing to pay much higher prices. Results are clear, winner takes it all, highest price in free-market means a different flow. The continuing pressure on NordStream2 and other pipeline options are also debit to the current clash. EU financial support, even via the EBRD or other international lenders, for hydrocarbon projects has also been quelled or thrown out. The vast gas reserves of East Mediterranean, North Africa or even Middle East, have been painted by EU media and politicians as stranded assets of the future. Markets and consumers are however thinking differently.

The current EU options are very bleak. For the coming winter, and maybe 3-4 winters to follow, no other option exists than to deal with cards handed to you. Natural gas and coal are back in play, with the power in the hands of producers. Even crude oil is looking at a surge in demand, as over 500,000 bpd of crude oil extra is needed to power up global economies.

To discuss strategic gas reserves is commendable, but….should have been done 10 years ago already. During the IEA’s “Golden Age of Gas”, politicians in Brussel and all European (including UK) capitals should have taken the decision to set them up. Politics, especially European politics, is a long-term strategy. If European leaders are not able to take a more realistic foresight approach, consumers will come back with an axe. Geopolitics and energy needs long-term strategies, not only goals. Current EU energy policies look only on the horizon (2050), but don’t understand that it needs a road to be build to reach this. At the same time, as long as the EU doesn’t have a real feasible long-term energy diversification and security of energy supply strategy, taking into account hydrocarbons and nuclear, as the backbone of energy transition, the total House of Cards will have the same strength as a Jellyfish.

Without a full-fledged hydrocarbon strategy and political-financial instruments to make it happen, building strategic gas reserves will not only be hit by public opinion (NIMBY) but will also remain empty. Long-term contracts or deals are needed, maybe even on an European Level. Decoupling electricity and gas prices is a political media statement, as there is no power-gas price contractual link. Demand and supply are the underlying factors. Both have been wrongly assessed by Brussels politicians and its green advisors.