The End of a Russian-Turkish “Golden Age”

The downing of a Russian plane by Turkey is jeopardizing the strong business and political relationship built by Ankara and Moscow. The two countries’ clash over Syria suggests that relations will get worse before they get better.

The shooting down by Turkey of a Russian warplane on November 24 closes the curtain on what has been a brief golden age in Russian-Turkish relations.

But the downing of the Su-24 jet on the Syrian-Turkish border prompted sharp language by the two strongmen, with Putin calling Turkey “an accomplice of terrorists.”

The episode coincided with a shift in Turkish politics, caused by the recent elections on November 1. Erdoğan’s Islamist party, AKP, which had been forced into a coalition government in June, scored a victory that enabled it to govern again as a single party.

However, the AKP fell just short of winning the majority in the Turkish parliament that it needs to call a referendum to change the constitution and achieve Erdoğan’s dream of establishing a new presidential republic. Erdoğan evidently believes that if he can project the image of a strong political leader, he will not only improve his rating with the public, but also be able to win the votes of wavering parliamentarians from the nationalist party, the MHP.

This is one reason the government has stepped up its rhetoric about “defending the Turkic world,” not only against the Kurdish militants of the PKK but also in its strong criticism of the Russian military operation in Syria. The Turkish authorities have said that they are defending their Turkmen “compatriots” on the other side of the Syrian border, who are allegedly being hit by Russian airstrikes. 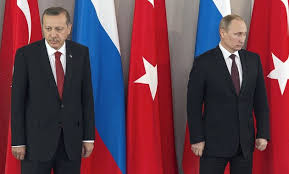 The Kurdish question is even more key. For Ankara, the fight against the militant Kurdish PKK is as important, if not more so, than the battle against the self-proclaimed Islamic State. The Turkish government has long resented Washington’s de facto alliance with the Syrian Kurdish movement, known as the PYD.

Even though the United States still formally regards the PKK as a terrorist organization, Ankara knows that Washington views any attack by Turkey on the Syrian Kurds of the PYD—which is closely associated with the PKK—as a “red line” it should not cross.

Russia’s military intervention in Syria was a new source of frustration for Turkey, not only because it helped to prop up Turkey’s adversary, Syrian President Bashar al-Assad, but also because it aided the Kurds. Then, the aftermath of the November 13 terrorist attacks in Paris increased the possibility of cooperation between Russia and the West in the fight against the Islamic State and further deepened Turkey’s worries that its interests were being ignored.

In this light, Turkey’s appeal for NATO solidarity after the November 24 incident can be seen as a chess move intended to restore Turkey’s influence in Syria. Turkey used its membership in NATO to characterize Russia’s alleged infringement of its airspace as a challenge to the alliance as a whole.

The way Turkey played the NATO card was a blow to the personal relationship Erdoğan and Putin had established as the foundation of their countries’ strategic partnership. Putin bitterly complained on November 24 that “instead of immediately establishing contacts with us, as far as we know, Turkey turned to its NATO partners to discuss this incident. As if we had hit their plane and not the other way around.”

Over many years, a strong economic partnership worth billions of dollars has protected Russian-Turkish relations from political shocks. The two countries recently agreed to build the Turkish Stream gas pipeline to replace the defunct South Stream project. Russia is contracted to build a nuclear power plant at Akkuyu in southern Turkey. Russians provide a huge number of tourists every year to Turkish resorts.

This economic relationship had thus far enabled the two countries to overcome their differences on Syria and manage difficult episodes, such as when Turkey forced a Russian commercial plane bound for Syria to land in Ankara in 2012, claiming it was carrying weapons, or when Erdoğan spoke out forcefully for the rights of Tatars in Crimea.

The shooting down of the Su-24 is obviously much more serious. The political relationship is bound to suffer. Russia has declared that it is suspending military cooperation with Turkey. There are rumors that commercial projects may be cancelled. Russian Foreign Minister Sergei Lavrov called off a visit to Turkey. Saying that the threat of terrorism was “not lower than in Egypt,” Lavrov warned Russian tourists against visiting Turkey as well and several Russian tour operators have cancelled flights there (even though this is the dead season).

These steps are for the short term and can be reversed through diplomatic efforts. But there is every sign that the underlying cause of the new downturn in relations—Russia and Turkey’s escalating clash over Syria—is intensifying rather than diminishing.

The Russian General Staff has announced that it is increasing Russia’s military presence in the region by deploying a Russian missile cruiser to the Syrian coast and sending fighter jets to accompany its bombers. That is also likely to increase the possibility of new incidents in the air over Syria.

In other words, all of the economic and political links that have been built over the past few years between Moscow and Ankara now suddenly mean much less in the context of their international clash over Syria.

Pavel Shlykov is an analyst with the Institute of Asian and African Studies at Moscow State University.

2015-12-02
Editor
Share
Previous What Is Salafism?
Next Daunting Challenges and Glimmers of Hope in Ukraine