The White House is determined to block the rise of the key nuclear-armed nations, Russia and China, neither of whom will join the “world’s acceptance of Washington’s hegemony,” says head of the Institute for Political Economy, Paul Craig Roberts.

The former US assistant secretary of the Treasury for economic policy, Dr Paul Craig Roberts, has written on his blog that Beijing is currently “confronted with the Pivot to Asia and the construction of new US naval and air bases to ensure Washington’s control of the South China Sea, now defined as an area of American National Interests.”

Roberts writes that Washington’s commitment to contain Russia is the reason “for the crisis that Washington has created in Ukraine and for its use as anti-Russian propaganda.” 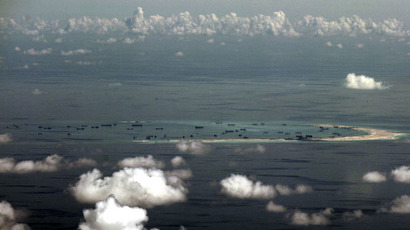 The author of several books, “How America Was Lost” among the latest titles, says that US “aggression and blatant propaganda have convinced Russia and China that Washington intends war, and this realization has drawn the two countries into a strategic alliance.”

Dr Roberts believes that neither Russia, nor China will meanwhile accept the so-called“vassalage status accepted by the UK, Germany, France and the rest of Europe, Canada, Japan and Australia.” According to the political analyst, the “price of world peace is the world’s acceptance of Washington’s hegemony.”

“On the foreign policy front, the hubris and arrogance of America’s self-image as the ‘exceptional, indispensable’ country with hegemonic rights over other countries means that the world is primed for war,” Roberts writes.

He gives a gloomy political forecast in his column saying that “unless the dollar and with it US power collapses or Europe finds the courage to break with Washington and to pursue an independent foreign policy, saying good-bye to NATO, nuclear war is our likely future.”

Russia’s far-reaching May 9 Victory Day celebration was meanwhile a “historical turning point,” according to Roberts who says that while Western politicians chose to boycott the 70th anniversary of the defeat of Nazi Germany, “the Chinese were there in their place,” China’s president sitting next to President Putin during the military parade on Red Square in Moscow.

“Russian casualties compared to the combined casualties of the US, UK, and France make it completely clear that it was Russia that defeated Hitler,” Roberts points out, adding that “in the Orwellian West, the latest rewriting of history leaves out of the story the Red Army’s destruction of the Wehrmacht.”

The head of the presidential administration, Sergey Ivanov, told RT earlier this month that attempts to diminish the role played by Russia in defeating Nazi Germany through rewriting history by some Western countries are part of the ongoing campaign to isolate and alienate Russia.

Dr Roberts has also stated in his column that while the US president only mentioned US forces in his remarks on the 70th anniversary of the victory, President Putin in contrast“expressed gratitude to ‘the peoples of Great Britain, France and the United States of America for their contribution to the victory.’”

The political analyst notes that America along with its allies “do not hear when Russia says ‘don’t push us this hard, we are not your enemy. We want to be your partners.’”

2015-06-04
Editor
Share
Previous Memo to Obama: Learn the Lessons of the Korean War to avoid Military Showdown with China
Next US Weapons Falling in the Hands of the Islamic State (ISIS): “2,300 Humvees in Mosul alone”