Of relevance to the current crisis in Ukraine, first published by Global Research on April 26, 2019

[In 2017], the Ukraine’s parliament (Verkhovna Rada) voted to outlaw the St George’s Ribbon, an emblem often worn to commemorate those who liberated the Soviet Union from Hitler’s rule. Up to seven million Ukrainian infantrymen comprised part of the Red Army during their struggle against Nazi Germany, as Hitler was finally broken in the east.

By winter 1943, the once apparently indestructible Wehrmacht was spinning on its tail, their officers with their heads turning about westward, as they gradually retreated towards the German frontiers. Come the spring of 1945, about 2.5 million dead Ukrainian soldiers lay strewn across central and eastern Europe, many of their bodies never to be recovered.

The decision by an increasingly far-right Ukrainian parliament to ban remembrance symbols which commemorate those who fought against the Third Reich is, therefore, a desecration of their memory. It is an attempt to wash over that awful suffering the Ukrainian state endured during the Nazi occupation, with Hitler outlining plans to turn the country into a servile colony of Germanic dominion. 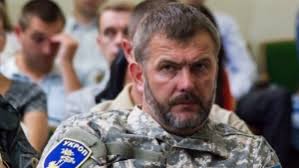 Over elapsing time from the February 2014 US-instituted “pro-democracy revolution”, an ever expanding group of neo-Nazis has been elected to office. Notable amid these menacing figures is the far-right military commander Yuriy Bereza (image on the right), an MP since November 2014 who was elected under the title “People’s Deputy of Ukraine”.

Bereza is a member of fascist-infiltrated party, People’s Front, which counts among its prominent MPs the neo-Nazi Andriy Parubiy, Chairman of the Ukrainian parliament since April 2016. In the early 1990s, Parubiy co-founded the far-right Social-National Party of Ukraine with fellow extremist Oleh Tyahnybok, that later became known as the Svoboda (Freedom) party.

When, in May 2017, a few of the Ukraine’s conscientious MPs objected to moves in banning the St George’s Ribbon, Bereza roared down from his parliamentary seat that he would like to “grab a machine gun and shoot those bast*rds”. Bereza cuts an intimidating figure. He is a tall man routinely clad in full army fatigues, with tightly-cropped hair, broad shoulders and stern expression.

In December 2018, Bereza punched in the face Nestor Shufrych, an MP with the centre-left party For Life, after the latter removed a poster from the parliamentary podium which accused wealthy Ukrainian politician, Viktor Medvedchuk (image on the left), of being a Kremlin “agent”. Medvedchuk is said to be an associate of Russian president Vladimir Putin.

Bereza is familiar with the use of arms. Since April 2014, he has held the position of Dnipro Battalion leader: A fascist-linked unit which has fought Moscow-backed separatists in eastern Ukrainian regions such as the Donetsk Oblast, an area which rests directly upon Russia’s south-western border, and is a mere 400 miles from Volgograd (Stalingrad). The Dnipro Battalion is subordinated to the Ministry of Internal Affairs of Ukraine, which among other things implements state policy.

Bereza and his regiment were involved in fighting during the autumn 2014 Battle of Ilovaisk, ending in decisive victory for the Moscow-supported Donetsk People’s Republic.

Bereza’s cause has drawn sympathy and backing from commercial media outlets like the Los Angeles Times, which wrote how his unit “survived on grass and rainwater as they braved five days of incessant sniper fire”. The LA Times also quotes Bereza and, despite a heightened risk of nuclear war, the newspaper calls for increased funding to be granted to the far-right battalions.

Over Christmas 2014, Bereza’s regiment was accused of war crimes by human rights groups, such as the deliberate starvation of Ukrainian civilians. His battalion has received more than $10 million of financial support from billionaire businessman Ihor Kolomoyskyi. There are photographs of the oligarch shaking hands amiably with Bereza in spring 2014.

Kolomoyskyi has provided critical support too for Volodymyr Zelensky, the Ukraine’s president-elect, by guaranteeing him widespread exposure on television networks that the tycoon owns. Kolomoyskyi is one of the most powerful and affluent Ukrainians in the world. His corporate influence extends from the Caucasus of Eurasia to the Appalachian mountains of North America.

In a plot befitting a Hollywood film noir, Kolomoyskyi is presently under investigation by the FBI regarding claims of “ordering contract killings” and “financial crimes”, including money laundering and embezzlement. In 2016, Kolomoyskyi was accused of defrauding the Ukraine’s largest bank (PrivatBank) of hundreds of millions of dollars.

Also that year a criminal case was opened in Russia against Kolomoyskyi, purporting that he had organized the killings of civilians. He has been compelled to deny other allegations in the past relating to bribery and abduction.

Kolomoyskyi, who lived in the US for a period and retains vast business interests in states like Ohio and West Virginia, moved to Israel last September – which may well complicate a potential extradition to America, as he also possesses part Israeli citizenship.

Kolomoyskyi has bankrolled other far-right regiments fighting in eastern Ukraine, such as the Azov, Aidar and Donbas battalions. These armed groups have been cited by human rights activists for committing an array of offences, including war crimes – which have gone unpunished – like torture, abductions, possible executions, unlawful detention, sexual assault, etc.

An alarming number of neo-Nazis have indeed been elected to office in the Ukrainian parliament. Over the past five years of what the Washington Post calls “fledgling democracy”, the following fascist figures have all enjoyed work as Ukrainian MPs, and they each comprise past and current members of the neo-Nazi Svoboda party: Oleh Tyahnybok, Ihor Mosiychuk, Oleh Osukhovskyi, Yuriy Bublyk, Oleksandr Marchenko, Oleh Makhnitskyi, Andriy Ilyenko, Ruslan Koshulynskyi, Mykhailo Holovko, Yuriy Levchenko, Igor Miroshnychenko, Pavlo Kyrylenko and Eduard Leonov.

The above’s presence in the corridors of power has been almost undocumented in mass media reporting. There are other fascists receiving continued employment in the Ukrainian parliament – like Andriy Biletsky, co-founder of the now defunct white supremacist Social-National Assembly. Since late 2016, MP Biletsky has held the leadership of National Corps, a far-right party. This organization is reported to be expanding steadily with Biletsky saying last monththat,

“we see how successful our movement is… Ukraine is tired of the chaos, it needs new people who will protect the country”. 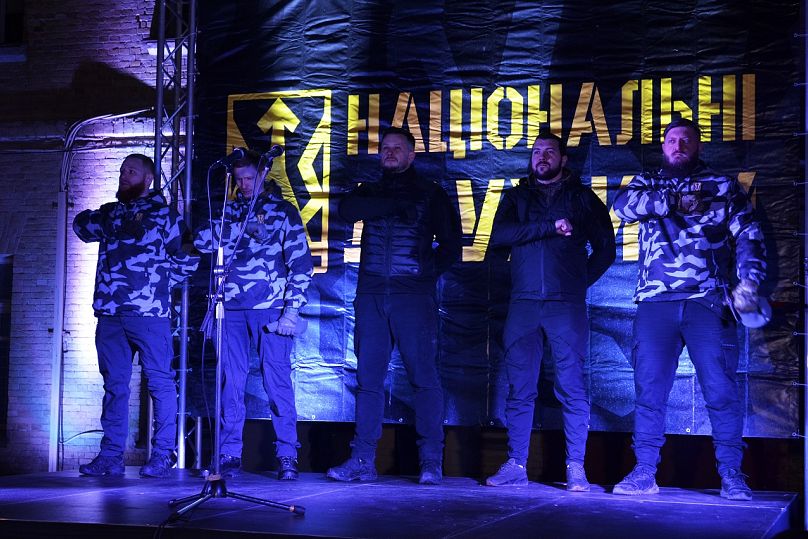 For over two years from May 2014 Biletsky commanded the Azov Battalion, which enjoyed tacit Western support whilst fighting Russian-backed separatists in eastern Ukraine. Azov Battalion soldiers can be seen in photographs giving Nazi salutes, while flanked with swastikas and other symbols based on SS insignia.

More far-right individuals are holding seats like Andrey Artemenko, a Canadian citizen and MP since November 2014, who claims to be a “neo-conservative” and has membership of the fascist-led Radical Party. The Radical Party leader and MP is far-right extremist Oleh Lyashko, whose militant activities in the east of Ukraine were condemned by human rights organizations, in which he was described as “one particularly errant MP”. Lyashko has been accused in preceding months of corruption relating to “illicit enrichment”, which he denies.

Among the Radical Party MPs is the briefly above-mentioned Ihor Mosiychuk, a neo-Nazi who is a past member of both the Svoboda party and Social-National Assembly. Mosiychuk, sworn to office in November 2014, is also a journalist and editor-in-chief of the hardline newspaper Vechirnaya Vasilkov.

Serhiy Melnychuk, former leader of the Aidar Battalion, is likewise a Radical Party MP, as he has been since November 2014. Melnychuk is currently under investigation over allegations regarding a false assets declaration, while he has previously been the subject of multiple legal cases and accused of abduction. Melnychuk was stripped of his parliamentary immunity in June 2015.

There are further far-right Ukrainian MPs embedded in seemingly respectable parties like the People’s Front. Among them is Ihor Lapin, a multi-decorated militant commander who comprised part of the Aidar Battalion, which draped Nazi-style insignia over its armoured vehicles.

Holding membership of the People’s Front too is the aforementioned Parubiy, who has enjoyed trips to America and Canada, and is acquainted with NATOSecretary General Jens Stoltenberg. The far-right military figure, Mykhailo Havryliuk, is himself a People’s Front member and MP, with Yuriy Bereza as stated also claiming a position in that party.

There are in addition fascists posing as “independents” in parliament such as Volodymyr Parasyuk, a former soldier in the Dnipro Battalion, commanded by Bereza. Parasyuk is a past member of the neo-Nazi party, Congress of Ukrainian Nationalists. He was elected in November 2014, and still enjoys a place as MP more than four years on. Parasyuk has a reputation for physically assaulting people he does not like, including cowardly attacks on statesman Oleksandr Vilkul and security chief Vasyl Hrytsak, kicking the latter in the head while he was seated.

Boryslav Bereza is a separate extreme right-wing independent MP, and was elected in November 2014; he is a former spokesperson for Right Sector, a fascist party, and despite his surname he is no relation to Yuriy Bereza.

MP Dmytro Yarosh, the one-time head of Right Sector, is yet another neo-Nazi who in the past was placed on Interpol’s international wanted list, acceding to the Kremlin’s request. Since late 2014, Yarosh constitutes a Ukrainian MP, and for many years he has been leader of the Tryzub (Trident) paramilitary group, whose full title is the Stepan Bandera All-Ukrainian Organization.

In Western establishment dialogue – pertaining to regimes they support – the terms “neo-Nazi” and “fascist” have been virtually erased from official records and reporting. These unequivocal labels are instead replaced with descriptions like “ultra-conservative”, “nationalist” and “maverick”. The latter ambiguous words blur the lines of neo-Nazism and fascism, sowing seeds of doubt and confusion in the reader’s mind. A fascist now becomes an ultra-conservative or nationalist.

There are other post “revolution” MPs who have been part of fascist regiments, like Nadiya Savchenko, an Iraq War veteran and former instructor in the Aidar Battalion. Savchenko is a far-right extremist, and had been held in a Ukrainian jail for over a year until her unexpected release last week – after being suspected of planning a terrorist attack on the Ukrainian parliament building, and intending to overthrow the government. Savchenko still faces trial regarding these claims, and prosecutor Yuriy Lutsenko said her departure from prison suggests that the country’s court apparatus is “gravely ill”.

In June 2014, Savchenko was arrested by Russian authorities, placed on trial, and after long deliberation was charged in March 2016 with complicity in the killing of two state journalists. President Petro Poroshenko championed Savchenko’s cause, describing her as “a symbol of the struggle for Ukraine”; and in March 2015 he awarded her the title “Hero of Ukraine”, the highest honour that can be bestowed upon a Ukrainian citizen.

Semen Semenchenko, the far-right Donbas Battalion commander, was sworn in as a Ukrainian MP in November 2014. Semenchenko’s election to parliament came weeks after his regiment was accused by a UN monitoring mission of executing war crimes on Ukrainian civilians, such as torture, beatings and sexual assault.

In September 2014, Semenchenko had arrived in Washington where he met Congress and Pentagon representatives. That same month he publicly called for US military backing, and enjoyed further visits to America later that year, while he is himself an admirer of Israel. In June 2017, an appeal was expounded against Semenchenko by former Donbas Battalion soldiers, who wanted an investigation conducted after accusing him of criminal acts.

In December 2018, Semenchenko was detained in Tbilisi, Georgia and suspected of “illegal possession and acquisition of arms”. He was not arrested due to having a diplomatic passport, and thereafter travelled by airplane to an unknown destination.

Note to readers: please click the share buttons below. Forward this article to your email lists. Crosspost on your blog site, internet forums. etc.

Shane Quinn obtained an honors journalism degree. He is interested in writing primarily on foreign affairs, having been inspired by authors like Noam Chomsky. He is a frequent contributor to Global Research.